Entek, an international manufacturer of lead-acid battery separators is making massive savings in energy costs at its European plant, after having changed the type of pumps used for cooling water duties. Having experienced poor economic performance and breakdowns over several years with submersible pumps, replacing them with AxFlow's Aturia NE Series DIN Standard end-suction water pumps has had a significant impact at the plant.

Entek is the global leader for designing and manufacturing lead acid battery separators and provides battery manufacturers with reliable, high-quality products for SLI, start-stop, deep cycle, motive and stationary batteries. The Killingworth-based firm is the only manufacturer of its kind in the UK, and exports 100% of everything it produces. The company's 0.15mm backweb separators are manufactured from polythene and precipitated silica. Its production lines which run on a 24/7 basis continually mix and extrude materials at an elevated temperature into continuous polyethylene sheets, which are then subjected to specialised process treatments.

Fundamental to production is the constant availability of cooling and chilling water which is held in cooling towers and pumped around the plant. Historically, water circulation has been performed using submersible pumps located inside the towers. However, modifications to the plant had resulted in the pumps having to deliver flow rates far in excess of their original design specification. In this situation it was inevitable that the pumps would suffer, with many of the problems being related to cavitation and vibration, plus the ensuing costs of pump removal.

Quite evidently, when the plant was constructed installing two submersible pumps in each tower was considered to be a good idea. However, it took several years of frequent repairs, maintenance and even the replacement of one pump before the issue of pump performance became a major cost issue. According to Robert Stobbs, Entek Maintenance Engineer, there was no method of monitoring the flow rates, and modifications to the plant did not take into account the impact on the pumps. "We cannot fault the pumps because their failings were as a result of the application and changes in demands," comments Stobbs. "We believe that the original pumps were originally shaft-driven submersible pumps. When problems were first encountered a decision should have been taken to change to a more appropriate pump type, which is what we have now done"

Pump distributor and maintenance company AxFlow had first-hand experience of the problems being faced by Entek as it was their Durham Service centre that was regularly being called into to carry out repairs. "The time taken in overhauling a submersible pump could be as long as three weeks, because every time a pump had to be removed we had to bring in a crane and remove the pump to our workshops. Thus, the costs in keeping these pumps in running order were not inconsiderable," says David McTeer Service Sales Engineer, AxFlow. "With externally mounted Aturia NE water pumps it is possible to do the work that would have previously taken three weeks in 24hours."

In 2015 a decision was taken by Entek to find a long term solution to the problems with the pumps. AxFlow was one of several companies called in to examine the problem and come up with a remedy. "We started by looking at the manufacturer's pump curves and this revealed that the pumps were pushing far more than water than was physically possible and it was this that was causing cavitation and excessive vibration," says McTeer". The AxFlow strategy was to remove the submersible pumps and replace them with Aturia NE Series pumps all of which would be located externally and connected to each tower by new pipework.

The Aturia NE Series is a well-proven high performance horizontal long coupled centrifugal water pump that offers a maximum flow of 2,000m³/hr. Fitted with dynamically balanced impellers without balancing holes that are susceptible to blockage, they are robust and offer high pumping efficiency and low NPSH requirements. The robust oversized shaft gives good rigidity and the presence of a thrower reduces condensation formed on the shaft from passing to the bearing areas.

The installation involved undertaking alterations to the pumping system on each tower and various groundworks. It was necessary to core drill the tower bunds, insert valves and pipework followed by installation of the pumps and variable speed drives. This programme of work required close co-operation because with the plant being a 24/7 operation it was necessary to keep one submersible pump continually operating in each tower during the pump replacement operation.

Energy savings
The amount of power that the old pumps used was a factor that was taken into when selecting new pumps. In order to arrive at a comparison, Entek monitored the energy consumption of the old pumps and this revealed what type of costs savings could be achieved. "We identified energy savings almost immediately as the new pumps were switched on," says Stobbs. "The variable speed drives provide us with this information and over the months that Aturia pumps have been running we have been able to identify the energy costs and savings for each tower."

Total energy savings (Table 1) of 816,000kW/yr have been achieved giving an energy saving of £79,000.The installation cost was £112,400 so the payback period is just 1.4 years. To put this in perspective, it is approximately 5% reduction in total site energy use." 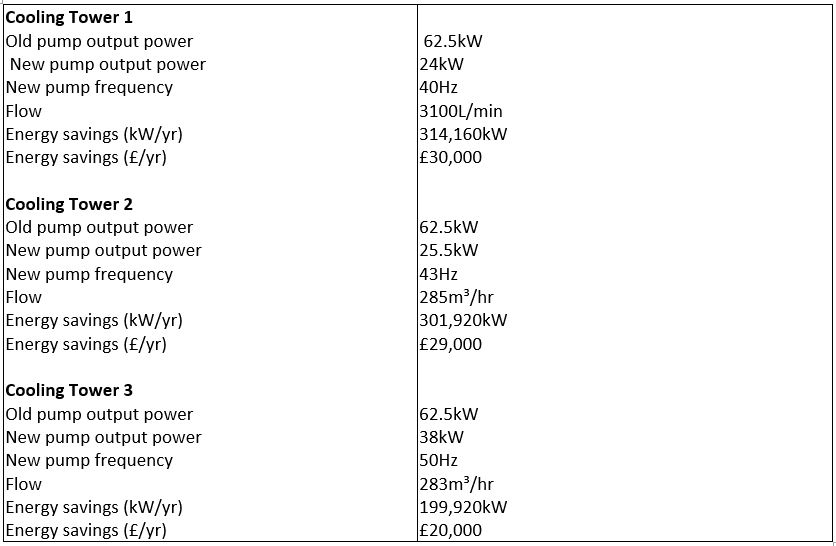