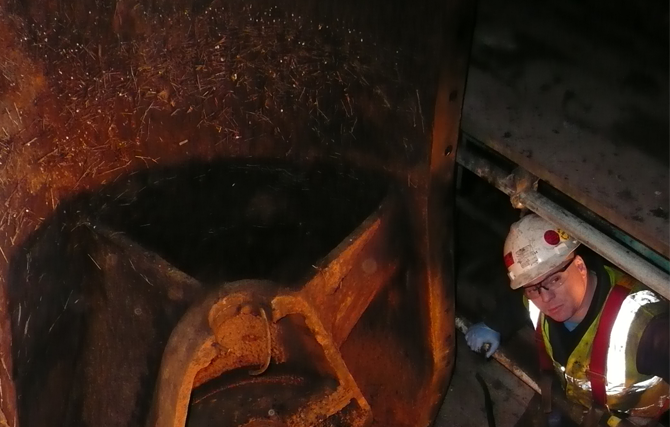 One of the challenges that AxFlow's maintenance engineers face when called in to quote for a pump refurbishment project is not knowing what the condition of the internal components will be until the complete unit is stripped down. Externally the pumps may look to be either in a reasonable state or not worthy of being rescued. This was the situation that confronted AxFlow's engineers when they were called in by the Environment Agency's contractors AMCO to the East Hull pumping station

An external inspection of the four Gwynnes 24-inch and 48-inch mixed-flow vertical land drainage pumps operating at the pumping station since 1949 indicated that the pumps were old and in need of replacement and had exceeded their design life capacity. When later removed from service by AxFlow for a thorough evaluation it was clear that they could be renovated to a standard that would meet the future requirements of the Environment Agency. Most importantly, AxFlow would be able to undertake the renovation project in a time frame quicker than a full replacement programme and at a more competitive price.

Hull is unique amongst English cities because parts of the city are below sea-level when there is high tide and the plain around it is higher. This means that water from the Wolds tends to drain down towards the city, so it is important that there's a good, well maintained drainage system in the city. The purpose of the East Hull Works is to transfer water from the Holderness Drain into the River Humber over high tide periods.

East Hull is the older of two pumping stations that service the city and both stations have undergone an upgrade aimed at improving the capability to move sewage, surface water and land drainage out of Hull and into the River Humber. East Hull Works pumping station stands at the point where Holderness Drain flows into the Humber estuary and operates daily around high tide when the tidal gates on the Holderness Drain are closed. The four Gwynnes pumps are used to pump the drain into the estuary at times of high tide when the normal gravity discharge is prevented. However, in the past couple of years, the East Hull pumping station has been called into service more frequently so the Environment Agency, which has responsibility for the pumps, has implemented a £900,000 refurbishment programme in order maintain protection against flooding for 1000 homes in East Hull.

"The pumps needed an overhaul so we decided to do it alongside a major refurbishment being carried out by Yorkshire Water", comments EA Project manager, Richard Hartley. "We were looking at long term options for the pumping station, but whatever we decided depended on the funding being available and any necessary planning permissions. Meanwhile, we could not leave the Bransholme area unprotected so we decided to go ahead with a refurbishment, which buys us up to five years to review possible options."

AMCO were contracted to carry out the refurbishment and this involved a complete strip down and overhaul of the pumping equipment by pump maintenance specialists AxFlow. The EA also looked how we can control levels in the drain to maximise the efficiency of the existing pumping station.

The existing building housing the East Hull Pumping Station was enlarged in 1972 to accommodate a sewage pumping system to carry screened effluent from the eastern side of Hull into the estuary. In 1989 overall responsibility for the site passed to Yorkshire Water at privatisation, but the former National Rivers Authority took over maintenance of the four Holderness Drain pumps, passing to the Environment Agency in 1996.
"We undertook an on-site evaluation of all four pumps in the East Hull works, " says AxFlow's Mark Redgrove, " and made recommendations as to what work would need to be undertaken to put them all back into a reliable and efficient operating condition. AxFlow removed the four pumps with assistance from AMCO, and brought them to our Huddersfield works where we did a full strip down to allow dimensional checks to be made along with an overall condition report."
The two 24-inch pumps, which were the first to be refurbished, were found to be in a reasonable condition, according to Mark Redgrove. "We found that the bronze bushes, sleeves and grease-lubricated bearings were fairly well-worn but were serviceable, and the impellers had been repaired at some stage so there was no reason for additional work. The two 48-inch pumps did need more work and it was necessary to cast a new wear ring for the back of the impeller on the third pump as the original was cracked. When the impeller race was removed on this pump it completely disintegrated. As luck would have it, we found three new impeller races on site, so we were able to make use of one of these for this pump and also one for the fourth pump as it was necessary to cut the race in order to remove the impeller."

Looking at the refurbishment programme for all four pumps, AxFlow have balanced the impellers and replaced all of the wearing parts such as bushes and sleeves on the shafts. By their design, each of the pumps contain three or four shafts as the water flow from top to bottom of the sump is 7m, so the shafts are in sections. In addition, all the white metal Michell bearings have been overhauled, the pads re-metalled, thrust collars skimmed and all the internal surfaces of the housing shot-blast and repainted. Running together, the refurbished pumps will a have the capacity handle 7.5m3 sec and they will be expected to run for periods up to three hours at a time twice a day.

"The key to the success of this contract was that we were able meet the Environment Agency's request to work all four pumps at once, as opposed to instigating a rolling programme," continues Mark Redgrove. "Because of the size of these pumps, weighing up to 12 tons, it was necessary to dismantle them on site then rebuild them back in our workshops once the refurbishment jobs had been undertaken to check tolerance and dimensions. We then had to dismantle them again for returning them to the pumping station and once again rebuild them on site. Because of the logistics of the programme of works on both the East and West works, we were given a tight timeframe in which to undertake the project. From first day onsite through to having the pumps re-installed and ready to run we were given 12-14 weeks."