Flood defence pumps get an overhaul

Grimsby’s Freshney pumping station is a key element of the town’s flood defences which were first enshrined in statute way back in the Grimsby Haven Act of 1796. When the pumping station was first built more than half a century ago it was equipped with three large Archimedes screw pumps. These were replaced some years later, but time and exposure to the elements have resulted in corrosion and wear, so some time ago, a major refurbishment programme was implemented in respect of the No.3 pump.

Over the years, the pumping station has been called into action on several occasions, but it is more than five decades since all three screws were operated simultaneously to prevent flooding. Almost a decade has passed since the last time that two of the screws ran simultaneously, indicating that should circumstances arise the station has adequate capacity to cope. In the words of Phil Christy, Grimsby Dockmaster:” It’s a pretty impressive piece of kit when it is running. It is simple to use and runs the same as a ship’s propeller.” Each of the three screws weighs 7 tonnes and the station has the pumping capacity to shift 6,000lt/sec.

Like all pumps, wear and tear eventually takes its toll and in the case of the No.3 pump AxFlow’s Huddersfield Service Base was contracted to undertake extensive and essential remedial work. Although the condition of the pump could be seen before removal of the screw itself, extensive examination undertaken once the pump was removed (Fig.1) from service revealed serious corrosion of the deflector plates, and all the cover grids were completely rotten. What did emerge was some fairly major works to be undertaken to replace two of the gears within the gearbox though. 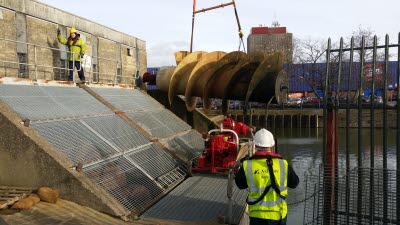 “The extent of our tender for the No. 3 pump included removing the screw, the cover grids, deflector plates, top and bottom bearings, motor and hand railing”, reports Mark Redgrove, AxFlow Technical Support Manager. “The screw was shot-blasted and coated with a Polyurethane coating supplied by Resimac to a thickness of 2mm to provide the 10 year life requested by the customer. The deflector plates, cover grids and handrails were all badly corroded and replaced with new items in galvanised 3mm steel plate.”

Not content with this amount of work, AxFlow also took the opportunity to make repairs to the No.2 pump. In the case of the No.2 pump, AxFlow repaired the bottom bearing which had failed prematurely after just three years service. Fortunately this job did not involve have to remove the entire pump and it was completed before the No.3 pump was re-installed. Therefore, at no time was the capacity of the pumping station impaired.

All the work was undertaken at AxFlow’s Huddersfield service base where there are specialised pump repair facilities capable of taking pumps up to 50 tonnes in weight. However, job of removing and re-installing the No.3 pump screw required AxFlow to draw on its logistics capabilities. “Given the size of the 7 tonne screw, at 5m long and 3m in diameter, it was necessary to bring in a 100 tonne crane (Fig.2) from Hall Bros, Bridlington with a reach from crane to lift of 20m for the removal and re-installation tasks,” says Redgrove. “We also had to bring in a diving team and smaller 50 tonne crane for installing the dam board, which performs the same job as stop logs in allowing the bottom bearing area to be pumped out.”

Fig.2       Specialist lifting services were required to lift the screw back into position.

The various engineering jobs undertaken by AxFlow were part of a rolling programme of refurbishment to the pumping station. Removing the screw started in January 2016 and it was returned to site, re-installed and commissioned in May (Fig.3). 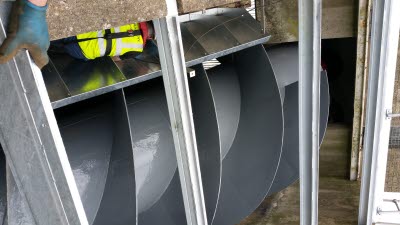 Fig.3      The screw reinstalled and ready for service.